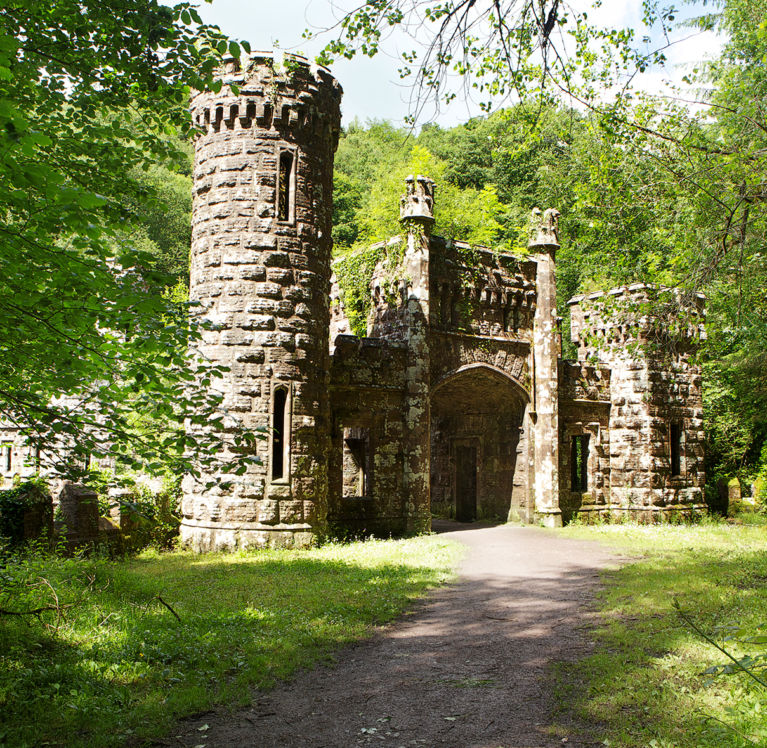 The Colligan walk takes the walker through woodland that grows along the valley of the River Colligan, where is a wide range of tree species. Deciduous trees such as Spanish chestnut, oak and beech grow here. Conifers include the Sitka and Norwegian spruce, cyprus and Douglas fir. Hazel, alder, holly, broom and gorse can also be found. Because of the presence of many clearings and deciduous groupings an excellent selection of woodland flora is present, such as wood sorrel, woodrush, wood sanicle, heather, bedstraw, bluebell and bilberry. Birdlife to look out for include the chiff-chaff, thrush, coal tit and goldfinch. With luck, you might spot the elusive treecreeper and jay.
Location: From Dungarvan take the R672 road for Clonmel. After about 5 miles/8 km turn right off the road and this lane takes you to the car park.
Distance: 3.5 miles/5.6 km
Time: 1.5 hours

The walk starts at Mooneys Pub on the R674. From Mooneys walk uphill past the tennis courts and stay on this road all the way to Helvick Harbour (3 km). There are fine views over Dungarvan Bay. Walk straight on keeping the obelisk on your left, then turn right after you have walked past the college. Turn left at the junction and follow a level narrow road until you think you are entering the gate of a private house. But just at the gate turn right onto a stony path, this takes you over a stile onto open ground. Walk up the steep hill keeping the furze on your left to reach the summit. There are excellent views from here. When ready, retrace your steps back to Mooneys.
Distance: 7 km
Time: 2 hours

The first section of this walk is along a grassy but solid road by the banks of the River Brickey and ends at the ruins of Knockmaun Castle. During the 15th century the castle was owned by Sir Richard Osbourne. It was totally destroyed by Cromwell in 1650 before he entered Dungarvan. The river derives its name from the O’Brics, who were chieftains of the Deise, the Deise were a tribe who settled here in the 3rd century a.d. The riverbank¹s vegetation includes alder, willow and sally. There is interesting bird life to be seen, such as the kingfisher, grey wagtail and long-tailed tit, and occasionally the green sandpiper can be spotted here. The river was dredged as far as the castle in the 19th century as part of a proposed canal that was to connect with the Blackwater, but the project was never finished. The second section ascends from the Brickey valley at a 100ft/30m to Kilnafarna hill at 868ft/264m.
Location: The walk begins about 2 miles/3.2 km from Dungarvan. Follow the signs for Clashmore, which can be found at the second roundabout (towards Waterford) on the Dungarvan by-pass (N25). After crossing the bridge (appropriately called Two-mile Bridge) take the road going right to begin the walk.
Directions: After about 400 yards/366m the tarred road veers right and the track continues straight on the grassy road for about 2 miles/3.2 km. About halfway along the track passes West Waterford Golf Club, which can be seen on the opposite bank of the river. Approaching the end of this stretch the ruins of the castle appear ahead, perched precariously on a sharp limestone knoll. The track bears to the left at the next junction and heads east in front of the castle. Just beyond the castle ruins, at the opposite side of the road, are the ruins of Knockmaun Church. Turn right immediately after the castle as the track continues south ascending out of the valley. It follows a quiet narrow road, which has a steep gradient and veers left off Knockaunabouchala Hill with its TV mast. It continues around Kilnafarna Hill, whose mast can be reached via the spur road to give an excellent 360 degree view of the surrounding countryside. After two left turns the track returns back down the valley. A right taken at the next junction returns the walker to the start.
Options: This long walk can be divided into two shorter walks.
The first walk goes as far as the castle and returns by the road to the south.
The second walk goes to the top of Kilnafarna Hill and back.
Distance: 7.5 miles/12 km
Time: 3 hours

Part of this short walk follows the Famine Road which leads uphill from Killongford to the Famine Graveyard in Pulla. This Famine Graveyard, which is situated close to the Seanachie Pub, is really a mass grave where the bodies of large numbers of people who died during the Famine of the 1840s are interred. The bodies, mostly from the town of Dungarvan, were carried to the site by horse and cart. The last stage of this journey followed the boreen (now called the Famine Road) that ascends the wooded Towlers Glen for about 1.75 miles/2.8 km. The graveyard has been cleared and marked with a commemorative monument. There are two pubs nearby. The traditionally thatched Seanachie and the Marine Bar, which is located about 400 yards/122m to the south along the N25.
Location: 2.5 miles/4 km from Dungarvan. Take the N25 road to Cork and turn left towards Ring (An Rinn) on the R674. Take the right turn immediately after this, and the walk begins at a hairpin bend. There is an arrow at the stile on the bend indicating where the walk begins.
Directions: The walk begins by going over the stile at the left of the hairpin bend. Continue walking uphill until you reach a forest track, which is well hidden among the trees. This is the old Famine Road and the trail follows it uphill crossing two farm roads on the way. After about 15 minutes walk the graveyard should be visible on the right. After leaving the graveyard the track continues south on a short lane that leads to a public road. A left-hand turn takes it to the Seanachie and another left after the pub takes the path north on a tarred road. The first left after about 0.5 miles/0.8km takes the walk back downhill to the start by way of a winding road.
Distance: 2.2 miles/3.52 km
Time: 45 minutes

The old railway line from Dungarvan to Waterford City is a spectacular 46km off-road cycling and walking trail which travels through time and nature across eleven bridges, three impressive viaducts and a long atmospheric tunnel all the way from the River Suir to Dungarvan Bay. Along this route in Ireland’s Ancient East is the site of a 9th century Viking settlement; the world renowned ornamental gardens at Mount Congreve; Waterford & Suir Valley narrow-gauge heritage railway; former woollen mills and railway stations; and beautiful landscapes along the River Suir, Comeragh Mountains, The Copper Coast and Dungarvan Bay.